Substantial effort has been invested in expanding the role of robots into a multitude of new domains, from schools, to grocery stores, to warehouses. But as robots are increasingly expected to work in close quarters or even interact with humans, the challenges in human-robot interaction have become more pronounced. Behaviors that allow robots to engage with humans safely, efficiently, and smoothly are difficult to create, which is exacerbated by human perceptions of and responses to robots, which is itself still an open problem.

The goal of this subteam is to create robot behaviors that promote safer, more reliable, and more effective interactions with humans. We use an interdisciplinary approach, leveraging work from cognitive learning theory, cumulative prospect theory, social psychology, and experimental economics to conduct foundational research in human-robot interaction and collaboration.

Prior research has shown that humans struggle to accurately judge the ability of robots. This gap in expectations creates misplaced trust, which can result in disappointment and erosion of trust. We hypothesize that this decrease in trust is caused by the human tendency towards loss aversion. Loss aversion, a part of Prospect Theory, states that people prioritize avoiding losses (or the feeling of loss) over accumulating gains when making decisions. Further work in experimental economics has indicated that “a prior expectation to take on risk decreases aversion to both the anticipated and additional risk”, meaning that when individuals are made aware that they are taking on risk, they experience less loss, and are less risk averse in the future. [Kȍszegi and Rabin, 2007]. In this project, we are testing the applicability of these experimental economics concepts in the context of human-robot interaction, in an effort to limit the expectations gap and promote more positive outcomes. With knowledge of how applicable these concepts are to HRI, along with information about the effects of risk awareness on human behavior with robots, we hope to be able to create new models of robot behavior that guide humans to more accurate perceptions of robot ability, without eroding trust. 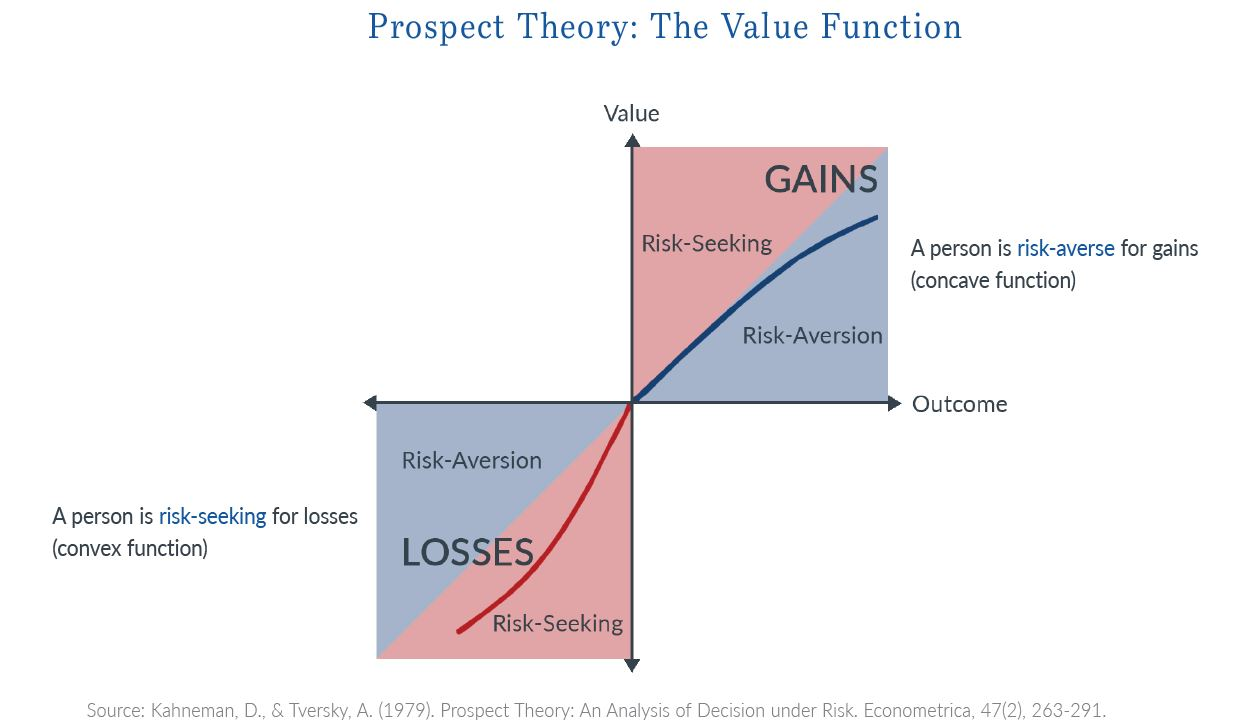 Humans have a tendency to underestimate the value of outcomes.

1.2 Student-Robot Teaming and Robots in the Classroom

Recent work in cognitive learning theory and social psychology present new opportunities to improve and rethink the application of robots in the classroom. Why are robots such powerful agents of tutoring, and how can we use their unique social roles to develop student skills in reading, STEM, and beyond, and address educational inequality across lines of race, gender, and ability? Current projects, conducted in conjunction with the NSF AI Institute for Student-AI Teaming (iSAT) and the Engineering Education and AI-Augmented Learning IRT, include study into HRI design considerations for students of color and developing a robot tutoring system to address grounded reading skills.

To incorporate robots into human teams, robots need explainable task representations and better understanding of the social dynamics of the human team to be an effective member. Our goal is to equip the robot with the ability to insert itself into an existing human team to promote collaboration and improve efficiency. How can the robot decompose complex tasks and find the optimal role assignments for the team? How does the robot balance the preferences of the human and the optimality of the task assignment? How does the robot know what roles to take?

The creation of information channels between robots and humans is complicated and fraught with potential pitfalls; the goal being a simplistic system that effectively carries information from one party to another consistently and clearly. While much work has gone into creating robot signals and modes of communication, most research seeks to answer the question “Does this system communicate what it was intended to?”, be it the robot’s path, intent, or status. Research is conducted in a controlled environment, so the applicability of these systems to environments constrained by space or time is unknown. We are currently examining the effectiveness of a projection-based trajectory system in a cluttered and fast paced environment. Through this work we hope to determine when this method of communication is most effective, and if/when the environment becomes too crowded or too fast moving for the communication to be effective.